Sermon: Our Pentecost Story
Back to all Sermons 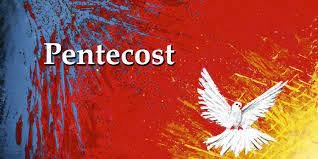 We come from Annisquam and Bayview; Lanesville and Rockport; downtown Gloucester, Wheeler’s Point, and Essex; Wenham, Marblehead, Lawrence, Cambridge, Boston, Norwood and Cape Cod; New Hampshire and Maine; New York and New Jersey; Pennsylvania and Ohio; Texas and Florida; and many other places; We are Protestants and Catholics, Episcopalians and Evangelicals; Unitarians and Universalists; Jews and Buddhists; “Spiritual, but not religious” and agnostics; We are women and men; Gay, straight, Bisexual, Transgender and questioning; We are young and old; We have been coming to this church since we were born and we have just started attending online since the pandemic began- today might even be someone’s first time; We may walk through the sanctuary doors on June 6th and we may never step foot inside the church; and somehow, through the grace of the Spirit, we are all connected as one church community today.

And like the disciples who were present in the Upper Room when the wind violently rushed in and the tongues of fire appeared, we may be amazed, astonished, and perplexed by all that the Spirit is doing in this community.  We, too, may ask, as this community continues to change and grow “What does this mean?”

Though Pentecost is often celebrated as the birthday of the church, as if it were a “one time” event in the past, it is so much more than that. And if there was ever a year to take to heart the new activity of the Spirit in our midst, this is it.

Before the pandemic began, less than 500 days ago, could any of us have ever perceived how we would be gathering today? Or who would be gathering with us? Or the new ways – like through our Creation Care Team or Diversity & Inclusion initiatives – that we would be called to be light in the world? Who could have seen these things coming?? Not me.

The Spirit is doing something new.

And it’s not only what the Spirit has been doing in, with, and through us since the pandemic.  Even before that, the Spirit has been planting important seeds in this church.  First, in 1929 when the church incorporated as Third or Annisquam Parish in Gloucester under Massachusetts law and no religious statement of belief was mentioned.  This definition allowed for people to join without being Universalist, which was the primary tradition of this church at that time. Later, after the church had been led by ministers from a variety of denominations – Universalist, Episcopalian, Methodist, and Presbyterian – the church voted in 1954 to be  “a Protestant interdenominational church for the public worship of God.”

In writing the history of our church, Rev. Sarah Clarke notes, “That key word, interdenominational, again announced that this church accepted people of many different beliefs within a structure of Protestant worship and a theology of God’s love—not God’s wrath.”

I can’t help but wonder what folks in 1954 would make of our far greater diversity.

And here we are. The Annisquam Village Church in 2021. Isn’t it delightful?

Keri Day writes, “The joy of Pentecost is that it gives us a vision and hope for a community made possible through the work of the Spirit. This miracle involves being open to the shocking and surprising ways of the Spirit, which empowers us to reach across differences in order to experience radical and insurgent communions.”

The presence of the Spirit at Pentecost crumbles all walls that we humans would construct – walls based on gender, age, race, education, experience, and social class. All who were present at the birth of the church were given power to speak.  In this story, God shows no regard for the status quo – for institutional structures, hierarchies or past practices.

One of the reasons in our worship that we usually make time for 3 minutes of silence and then for responses from the community is because of a deep recognition that the Spirit alights on each of us and moves through us for the benefit of all of us and beyond.  The most important thing we do each Sunday is to create room for the Spirit to move us – for the greater, common good.

The disciples who were gathered together had to widen their circles and welcome strangers into their midst – which is something we’ve been doing and will continue to do as we again transform our way of gathering for worship in just two weeks – when we will begin hybrid worship. We are in uncharted territory.  And though it may feel unsettling –  we are not the first to face such momentous changes to our self-understanding, spiritual practices, and mission as a community.  In fact, it is inherent in the nature of the church that was ignited in the Upper Room. From the beginning, the Spirit jolted the community to grow; to include others who they would never have thought would take part. We can take heart in the presence of the Spirit, the very source and foundation of our life as church.

Ivan Nicoletto writes, “We usually think and act in terms of continuities, predictability, repetition of schemes and plans, and the Pentecostal event shows us God’s capacity to interrupt, to break those schemes open, and to violate those formulae: it is a bold and risky spirit, even disobedient, when it is a matter of uncovering new paths of life.”

My friends, the history of the Annisquam Village Church reflects the presence of the ever-renewing Spirit. We are in a Pentecostal moment as a church community, on the precipice of a new and exciting future.

For 63 Sundays, we have met on Zoom. 63. In that time, the number of people who have joined us on any given Sunday has more than doubled. I have met most of you, but not all of you.  And many of you have not yet met each other. Since this is the second to last Sunday that all of us are on Zoom together – and next week our worship will include a remembrance of our beloved Joe Mechem – let’s take this opportunity to celebrate and embrace our diversity, to embrace one another, and to embrace the newness of what the Spirit is doing in our midst.

At the conclusion of this sermon, rather than have three minutes for silent contemplation, you will be invited to experience a different manifestation of the spirit – the Spirit that moves between us. On your screen, you will be invited to join a breakout group with two other Zoom rooms. My hope is that those of you who have been comfortable with your video camera off, will turn it on, so that everyone will have an opportunity to meet at least one new person.  During this time please introduce yourself, share your location, the religious tradition you were raised in, and how long you’ve been coming to the AVC.

After you introduce yourself in the small group, please share as briefly as possible – What inspires you or intrigues you about this church community? Please accept the invitation to the breakout room; You will have 4-5 minutes to chat… and then, as always, we look forward to hearing your response…