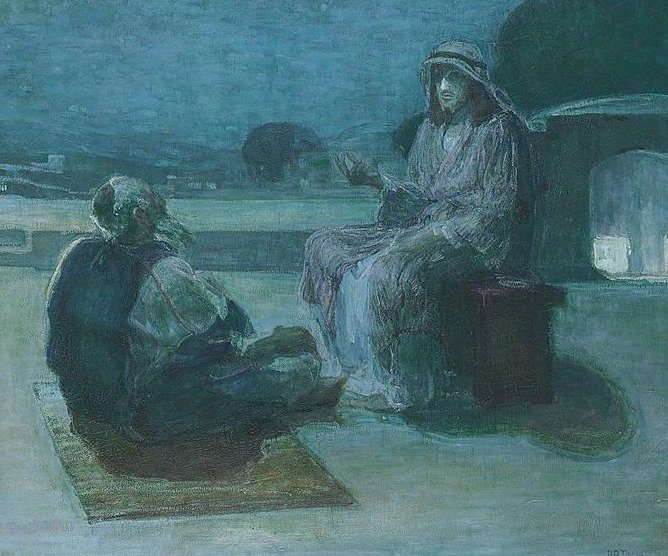 On Wednesday night I had the privilege of serving at the Open Door with a group of wonderful volunteers from our church community.   It turns out we were the last church to serve there before their leadership made the difficult decision to no longer allow community groups to volunteer.

To my surprise, my friend, Uma, walked in for dinner.  After being sure the guests had been served, I sat down next to Uma to share a meal and converse with the others at the table.  At one point, an older woman with long, messy hair and very few teeth sitting across from me shared her thoughts on the importance of good nutrition.  I confess that I had not expected someone eating at the Open Door to be so knowledgeable. As I took note of my reaction, I realized that I had brought a huge set of assumptions with me when I sat down at the table.  I am embarrassed to say that I never imagined that this woman would be so intelligent and wise.

The woman at the well, likewise, was a person that many in her community likely underestimated, and even condemned. Respectable women made their trips to the well in the morning, when they could greet one another and talk about the news. Showing up at noon was a sure sign she was not welcome at their morning social hour.  Her social distancing was rooted in fear and anticipated judgment.

In relation to Jesus, this woman was a double-outsider: a Samaritan (who Jews saw as enemies and vice versa) and a woman (who Jews believed had no place in public life; who were not to be seen or heard, especially by holy men, who did not even speak to their own wives in public.)

Neither this woman’s own Samaritan people or any Jewish person would look at the Samaritan woman and expect that she would have something to offer. To them she would be either condemned or invisible or both. The burden that she likely carried was immense.  We are not told why she has had five husbands, but in first century Palestine, a woman could not initiate divorce except in extremely rare circumstances. Therefore the Samaritan woman’s five former husbands must have either divorced her or died. Either way this spelled disaster for her since women relied on the patriarchal household to survive.

The encounter between the Samaritan woman and Jesus is a wilderness encounter for both of them.  At the well,  they are both vulnerable.  Jesus is there because he is weary and famished.  He is in need.  When he asks the woman for a drink, when he asks her for help, it is not only a surprise that he is crossing cultural and religious boundaries to speak to her, but it is an even greater surprise that he is willing to let himself be seen by her in his vulnerability and to allow her to give something to him.  Just by speaking with her, not ignoring her or condemning her like so many others have, Jesus is showing her respect, something she had probably not experienced in a long, long time, if ever.

Back in 1985, shortly after I graduated from college, I traveled with an ecumenical group to study and work with some Benedictine sisters in Cuernavaca, Mexico.  One morning, our guide took us on a walk through a shanty town. I had never seen such poverty in my life. Houses made out of cardboard, no running water, children running through the area with torn and dirty clothing. We stopped at what looked like a tee-pee, surrounded by a small enclosure of chicken wire.  Out came an old, stooped woman – whose face was crackled by sun. She invited us to sit on a wooden bench and said she’d be right back. Our guide told us that to survive, this old woman went to the nearby farmer’s market at the end of the day and gleaned any fruit or vegetables that had been discarded. When she returned to us , the old woman opened her apron and invited us each to take a piece of fruit. How could I take fruit from a woman who had so little?  I began to decline the offer, when my friend, Kevin, elbowed me sharply in the side and shot a fierce look at me, saying “Take the fruit. Not to would be disrespectful.”

Later in the afternoon, reflecting on the experience, I learned what was a revelation for my 22 year old self: Being able to give to others is at the core of what it means to be human.  Giving enlivens the soul. The old woman in the shanty town taught me that in giving to someone else we can connect heart to heart, person to person. She showed me that hospitality is a spiritual practice and that there is nobility in giving and in receiving graciously.

Fortunately my young self had plenty of opportunity to practice this when I returned from my trip to work at the St. Martin de Porres Shelter, where over 200 men over the age of 50 stayed each night.  I can still see the joy on the face of “Dumpster John” (that’s what everyone called him!) when he would present me or other staff with one of his treasures. I still have a set of jingle bells that another resident, Gene “Mr. Hibbs”,  gave me. One afternoon one of the guys even wanted to share his bottle of Mad Dog 2020 – which I would NOT recommend you try. Being with these men taught me how giving can uplift the spirit and enable the giver to be seen and appreciated.

Martin Luther King once said, “Any one can be great because any one can serve.”
By allowing the Samaritan woman to give to him, to serve him, Jesus restored her sense of self and her sense of value.  By allowing himself to show her his need, Jesus reminds the woman that she has something to give.

One of the great mistakes we can make in relating to those who are struggling – whether with serious physical or mental health issues, financial issues, aging, or other challenges – is to presume that only those of us who are strong and healthy and intelligent have something to give.  We diminish another person’s value when we see our relationship in a limited way – that one of us serves and the other receives. When we maintain this type of social distance, we are not treating others like the sisters and brothers in Christ that they are.  This limited way of giving maintains differences – in status and in love; This way of giving maintains boundaries rather than transcending them.

By allowing himself to be seen in his need, to be vulnerable, Jesus makes it safe for the Samaritan woman to be seen in her need. Jesus is the one who shows her and us who we are by showing us who he is—someone who crosses all boundaries, breaks limiting rules, and drops all disguises.

As sociologist Brene Brown writes, “The difficult thing is that vulnerability is the first thing I look for in you and the last thing I’m willing to show you. In you, it’s courage and daring. In me, it’s weakness.”

She goes on “This is where shame comes into play. Vulnerability is about showing up and being seen. It’s tough to do that when we’re terrified about what people might see or think. When we’re fueled by the fear of what other people think or that gremlin that’s constantly whispering “You’re not good enough” in our ear, it’s tough to show up. We end up hustling for our worthiness rather than standing in it.

When we’ve attached our self-worth to what we produce or earn, being real gets dicey.”

How amazing that Jesus was willing to be vulnerable with a woman whose whole life was marked by vulnerability. His way of being with her, treating her with respect and kindness, opens the door to serious conversation about what was the primary conflict between Samaritans and Jews – the location for worship of God. Noone would have ever expected the Samaritan woman to be knowledgeable on such a matter. Let’s just say that it would have been highly unlikely for her to have this conversation with anyone else – even her own people. But, Jesus takes her questions seriously and in the conversation that follows they each show more of who they really are to one another. It’s a conversation that changes her life.

Maybe you’ve been fortunate to have that kind of conversation with someone at a time that meant more to you than you could ever have hoped for.  Maybe you were a student and a teacher recognized your potential; Or you were simply busy going about your work and someone commented that you weren’t just doing a job, but that you were putting your whole self in your work; or you were at a time in your life when you felt invisible or under appreciated and someone made a point of recognizing your gifts and your potential.

In loving service – whether at the Open Door, in our neighborhoods, in an overseas mission, or in our very own homes, we are called to see beyond distinctions of wealth and poverty, success and failure, good luck and bad luck, to the oneness we share in Christ. We are called as sisters and brothers to relationships of openness, mutuality, and care.

Today you and I are doing something none of us could have likely imagined.  We are sitting facing each other through screens because we are all vulnerable in the face of the Coronavirus.  This public  health crisis is forcing us to do things differently – to protect ourselves and to protect all those who are most vulnerable.  The social distancing we are practicing is not, like the Samaritan woman, because we are being condemned by others, but it is a way to express love for others, including people we will never see or know.  It’s so important for our spirits that the distance we are practicing is an act of care, not merely an act of fear. All of the modifications we are making to our behavior is a way to try and bend the curve of this threatening illness.

Making such radical changes is not easy. And it’s likely that it’s only going to get harder. But when you feel resistance to giving up something you want to do, remember that to do so is an act of love.  And in those moments when this collective wilderness experience is not only something you feel some resistance towards, but is causing you distress, will you allow yourself to be seen in your need? Will any of us have the courage to ask, as Jesus did, for help when we need it?

Jesus reminds us today: God  is spirit, and those who worship God must worship in spirit and truth. Whether we gather online or in the sanctuary,  may we trust that the Spirit of God is with us; that Christ will walk with us as we journey through the wilderness together – even at a socially responsible distance – towards the promise of new life. As the Samaritan woman encountered Christ at the well, may we also encounter Christ at this time of wilderness. Amen.

Our latest news delivered to your inbox.