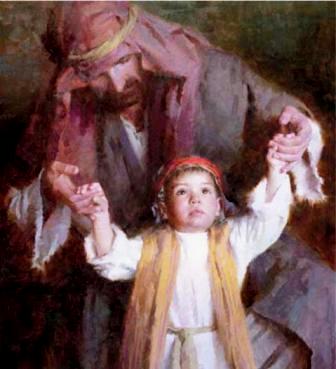 Growing Up in Nazareth

When I was young, I had a hard time understanding why we learned about and celebrated Jesus’ birth in December, and then two or three months later started to talk about his death and resurrection.  What happened between his birth and the time he left Nazareth?  Your kids may be puzzled by that too!

Only a few months ago we celebrated the birth of Jesus.  Christmas can be  a joyful time for children and for families. We all have heard the story of Jesus’ birth; that Mary and Joseph travelled to Bethlehem to pay taxes and that the inns in Bethlehem were full.  We know that Mary gave birth to Jesus in a stable, and we remember the story of the shepherds and the angels.  But we never hear very much about Jesus’ childhood or life with his family after Mary, Joseph and Jesus left Bethlehem.

When the Magi (or kings) followed the star to Bethlehem they stopped to ask King Herod if he knew where the new king was being born.  Herod was afraid that this new baby would replace him, and threatened to hurt the baby. But an angel appeared to Joseph in a dream and told him to take Mary and Jesus to Egypt, which was not under King Herod’s rule. The family was in Egypt for about a year, when they heard that King Herod had died; they returned to their home in Nazareth in Galilee.

Jesus, his family and most people who lived in the country of Palestine followed the Jewish faith.  Jesus was born in Bethlehem, and was blessed at the Temple in Jerusalem when he was a baby.  But Jesus grew up in the town of Nazareth with his mother Mary, his dad Joseph, four younger brothers and younger sisters (Matthew 13: 55-56.) He, his brothers, and his sisters learned the ancient stories that you have learned.  They learned about Moses and the burning bush, and about God’s covenant with Noah.   They learned about Jonah getting a second chance and having to change direction. They heard or sang some of the Psalms of David that we hear in church.  Jesus, his family and his friends learned these stories  from the Torah: these same stories are in our “Old Testament.”

The Bible tells us that Jesus “grew and became strong; he was filled with wisdom, and the grace of God was on him.”  (Luke 2:40)  Growing up,  Jesus helped his parents at home, and helped his many brothers and sisters.  He studied, made friends, and learned to be a carpenter by assisting Joseph.  When he was young, Jesus did not know exactly what his future would be, but he remembered the stories of Moses, and Noah, and Jonah.  He remembered the words of the Psalms.  Jesus knew that God loved him, that he loved God, and that he was God’s son. He understood the importance of God in his life and shared his love with others.

As  a young man, Jesus continued to live in Nazareth and to work as a carpenter.  When he was about thirty years old, Jesus knew that it was time for him to tell other people about God’s love and to share God’s love with people in other towns.  He left his home, knowing that wherever he went and whatever happened, God would always be with him.  His life and the life of everyone he met was forever changed.

Over time, Jesus gathered a group of followers. More and more people heard about Jesus, and traveled long distances to hear him speak.  You probably remember that Jesus asked Simon Peter, Andrew, James, and John, to come with him and be “fishers of people.” Soon Jesus gathered eight more disciples;  Simon Peter was the first and most respected disciple.  Jesus’ twelve disciples helped him by sharing God’s love with the crowds who gathered.  They preached and taught, they healed, and they baptized people.  They told others about Jesus’ teachings and assisted Jesus in every way.  Jesus was their leader, and they followed him.  They couldn’t imagine life without him.

However, while many people followed Jesus and listened carefully to what he taught , the chief priests and respected leaders of the Jewish faith did not agree with Jesus – because Jesus didn’t always follow their very strict rules.

In the story Rob Russell will read on Sunday (Mark 8: 31-38) Jesus is again speaking to a group of people, and the twelve disciples are with him.  He encourages the disciples and the group to help each other: to take care of others as they take care of themselves.

These six weeks before Easter are known as Lent.  This is a time when people try to become closer to God, because they want to know God better. As you go through Lent and prepare for Easter, take time to be kind, and to share your love with  others.

In the week ahead, pay attention to the people you love and the world around you. Watch for  moments and surprises that give you joy, and watch for moments when you can give joy to someone else by helping them.  You are blessed to be a blessing to others.