Sermon: What Matters Most
Back to all Sermons 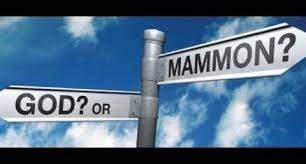 What’s really important in life? With all that is competing for our time and attention – in a very complex world – how do we stay focused on what matters most? How do we live in such a way that we value what and who God values?

Let’s begin by understanding the context of the story.  Jewish law prohibits charging interest because it exploits the poor, who God deeply cares about.  Remember, while speaking to Moses at the Burning Bush, God says, “I observed the misery of my people who are in Egypt; I have heard their cry on account of their taskmasters. Indeed, I know their sufferings,  and I have come down to deliver them.” Our God sees and hears the cries of the poor, feels their pain and takes action.

But, in the time of Jesus, rich landlords often found a way to get around Jewish law.  They charged exorbitant rates, often hiding what amounted to interest in other “fees.”  The manager likely added a cut for himself. So when he learns that he would be losing his job – (at a time before Social Security, severance pay, unemployment insurance or retirement accounts) he has to find a way to make sure he doesn’t end up homeless. Like many people in our culture, he is a paycheck away from trouble and is suddenly in a very vulnerable situation. It is a “come to Jesus” sort of moment.

The people whom he used to exploit, he now needs as friends to give him a place to live. So, what does he do?  He reduces their debts. It’s possible that he might simply be eliminating his own cut; or the prohibited interest   or reducing the principal owed.  We don’t know. What we do know is that the steward is surely reducing his own take as well as that of the landlord – who had been taking too much. It is an act of trust – trust that if he gives the debtors a break, they will be kind to him.  For the poor debtors, the steward’s actions -albeit with a self-centered motive – would not only be a huge relief, they would be an act of justice.

In the Lord’s Prayer, “forgive us our debts” isn’t merely a spiritual concept. The poor of Jesus’ time lived under a crushing economic system that placed unjust burdens on them.  As do the poor of our time. Forgiving debts, like student loans – for example – is one way a society can try to balance the scales of economic fairness.

What does this suggest about what’s important in life?

How we treat other people matters. For most of us, the day will come when we lose a job, or develop a sudden debilitating illness, or the money dries up; the day will come for many of us that we can no longer support and care for ourselves.  Then what? Then we see how we have treated other people matters.  If we haven’t been good to others, in our time of need, we might be in real trouble.

Notice this. The relationship between the steward and debtor starts as “win/lose.” The owner and manager win, the debtor loses.  When the manager is faced with losing his job, the dynamic could have become lose/lose for both manager and debtors. Instead, the manager creates a win/win situation – the debtors are given relief and the manager may have made some new friends. Using the skills he developed in business, the manager takes a sticky situation and finds a creative way forward. This kind of creativity – finding a solution that benefits himself and others is what the steward is praised for.  The larger lesson is    that   is how we are to live – in ways that benefit ourselves and others. These things don’t need to be mutually exclusive.

Though he was merely trying to save himself, the manager’s actions changed the relationship he had with the debtors – from one in which he had power over them to one in which he recognized his dependence on them. He knew that once he no longer had money or power, he was going to need other people. Money can give us the illusion that we really don’t need others.

This reminds me of a story a church member told me a few weeks ago after worship.  Jack Welch, who was once hailed as a business savant for the financial success he had with GE, was known to treat his workers terribly and cut corners on his products to ensure the company’s profits.  Then, he got sick. Very sick.  While he was about to get an MRI, he noticed that it was a GE machine. He asked the technician – who had no idea who he was – what she thought of the equipment.  “Oh!” she said, “the machine down the hall (which happened to be made by a competitor) was much better.  But, it wasn’t available – so this GE machine was going to have to be good enough.” The story goes that he went back to GE and told his employees that they needed to make better machines.

What does this suggest? If you put profits over people, short-term thinking over long-term thinking, it just might come back to haunt you. No wonder we have a climate in crisis.

We do not know what it felt like for the steward to forgive some of the financial debts. We do not know whether or not he was sorry for having overcharged the renters. But, what we do know is that he suddenly identified with them.  His social status was changing from middle to low and all of a sudden his life looked very different.

“And I tell you,” Jesus says,  “make friends for yourselves through your use of this world’s goods, so when (not if) they fail you, you may be welcomed into your eternal homes.”  In other words, our pursuit of the world’s goods – of wealth – ought never be an end in itself.  The purpose of wealth is to build loving relationships and to serve God.  Money is intended for the service of God; we are not intended to serve money.

From God’s point of view, wealth earned on the backs of the poor is wrong.  But, wealth used to lighten the burdens of the poor is rightly ordered. Getting this perspective right, especially in a world with grave economic inequalities, is at the heart of Christian ethics. Economic practices that harm the poor or create greater poverty, are not pleasing to God. Period.

Embracing the true riches God offers requires trust.  Here is a fascinating detail: the etymology of the word Mammon – usually translated as money – actually means “that in which one trusts.” What is written on a dollar bill? In God we trust.  But, do we?

Most of us have a complicated relationship with money.  In a world with rising inflation,  eye-popping housing prices, a lack of affordable housing, and a climate in crisis, it is almost impossible for even the wealthiest among us to feel secure.  We are riddled with anxiety about the future for our children and grandchildren. It can be hard to place our trust in God when we feel flooded by the challenges of the world. But, this exactly what God asks for – God asks that we place our hearts, our trust, in God. Not in the rising and falling stock market or our rising and falling fortunes.

What might this world look like if we saw money as it truly is – a temporary gift; a gift that has the potential to be used not merely for our own individual interests, but for the creation of a healthier world? What if we were to see that God has entrusted us with financial resources so that we can try and make this world better than when we arrived? What if we were to see – not only when we are in trouble – that our relationships are of more value than what’s in our bank accounts?  What would our lives look like if we lived from the conviction that people are more important than profits? What might our lives look like if we invested our vital energy not merely in securing our own financial futures but in building communities of mutual care and support? This week Patagonia’s founder, Yvon Chouinard, did just this.

Yesterday I officiated a Memorial Service in downtown Gloucester for someone who by the world’s standards was not a “success.”  Barbara grew up poor, never went to college, never owned her own home, and didn’t go on fancy vacations. But, she married her soulmate, had two daughters who adored her, and was loved by everyone who knew her. Her husband told me “She was the best person I ever met in my life.” There was always room at the table for a neighbor in need.  She paid special attention to those kids who were in trouble and let them know she believed in them. She brought food to the elderly. Her faith in God was the anchor of her life.  There were not enough chairs for all the people who attended a service that was filled with laughter and tears.  Because of the difference she made in other people’s lives, her spirit will live on. She had her priorities straight.  She knew what matters most.

“You can not worship God and Money. You justify yourselves in the eyes of mortals, but God reads your hearts.”