Sermon: True Love
Back to all Sermons 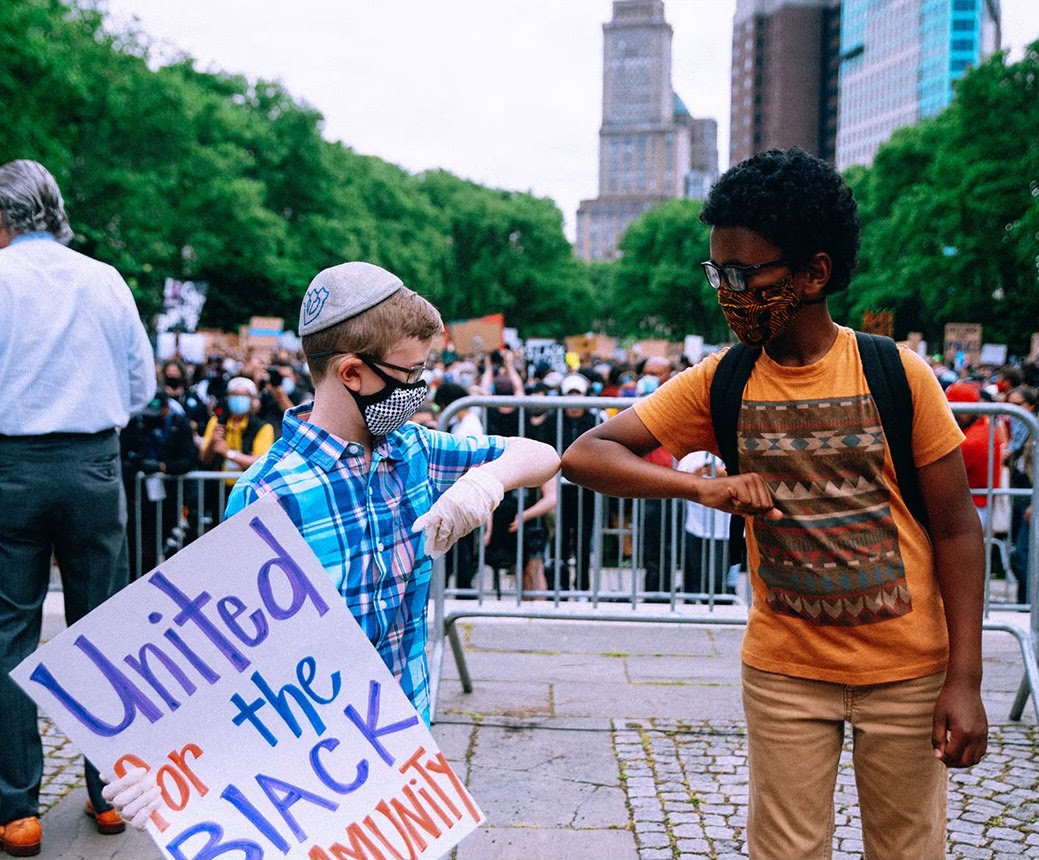 There are some scripture texts that don’t need a whole lot of interpretation.  The first part of today’s is one of them.  “How does God’s love abide in anyone who has more than enough material possessions and sees neighbors in need and yet refuses to help? My children, our love must not be simply words or mere talk – it must be true love, which shows itself in action and truth.”

No argument, there.  Right? Love is more than a feeling.      Love is a verb; it is something we do. Whether the path is Jewish, Christian, Muslim, Hindu, Buddhist, Native American or other – all agree: loving service IS at the heart of spiritual living. Service is so much at the core of what it means to be a Christian, that without it John’s letter suggests we are not living as true followers of Jesus.

As Americans in 2021, one of our biggest challenges is that we live in such a divided, segregated society.  Many of us rarely see those who are truly in the greatest need.  In fact, many of us (though definitely not all of us) can pretty easily go about our daily lives and never encounter anyone who is in true material need. Often our neighbors look just like us and have many of the same opportunities, privileges, and challenges that we do. (Not to make light of any of the challenges you or I are facing, but we know that when people lack resources, addressing things like health challenges can be far more difficult. Just look at which groups have been most adversely affected by the pandemic – not us, but poor people of color.)

For the last three weeks, ten members of our church’s new Diversity and Inclusion Team have been piloting the 21 Day Challenge, a self-guided learning journey to examine the history and impacts of racism and inequities. The goal is to deepen our collective learning about, and commitment to, racial equity. The plan is that in the fall we will offer elements of this study to the whole congregation – and perhaps, to the wider community.

Growing up in Schenectady, New York, I had always presumed that certain ethnic and cultural groups congregated together in particular neighborhoods because they wanted to. Perhaps you presumed the same thing. It never occurred to me that even as more and more people moved out of ethnic enclaves for the suburbs, the reason Black folks continued to live in specific neighborhoods was because they could not get mortgages as readily as White folks.

In his book, “The Color of Law,” Richard Rothstein painstakingly points out that since the early 20th century, zoning laws in cities across the country were intentionally segregated by race. Even when Black war veterans returned from World War II, the Federal Housing Administration did not allow them to obtain mortgages. Despite fighting to support the U.S. mission, Black soldiers were explicitly discriminated against because they were viewed by banks and the federal government as “higher risk” loans. Local developers were even required to include in their codes a refusal to sell to people of color in order to obtain federal funding,  For generations, the U.S. housing system has contributed to significant, longstanding entrenched inequities across racial lines. It is no accident that most of us have few Black people as neighbors.

For many white people, not only are Black people not our literal neighbors, but many of us even struggle to see them in neighborly ways. If Derek Chauvin had seen George Floyd as a neighbor, could he have murdered him?

Let’s face it – how many white people choose to live in predominantly poor or Black neighborhoods? If I were to ask that question of us today, I can think of only one person who would raise her hand –  my friend, Johanna Berrigan, who often joins us from her Catholic Worker home in the poor, multicultural Kensington section of Philadelphia. She moved there 30 years ago to open a clinic. Amazing. And rare.

But, most of us are not moving any where any time soon, if ever. How to be neighborly with Black people and others who are not proximate to us is not obvious.   And the fact of the matter is that our separation from others of different races and classes is so great, that many of us do not understand the depth and breadth of the needs of others beyond our own communities.

Let’s also acknowledge how much we like our comfort and safety and security. Those of us who live in Annisquam or other sections of Cape Ann are pretty darned content.  I know I am and I’ve heard many of you say so, too. We love where we live and we love the people with whom we share our own neighborhoods.  One of the most amazing things about Annisquam is how caring this community is. This is a wonderful thing… The question is: how can we expand our love to live as neighbors with those in our cities and country who really do need help. And lots of it.

On Tuesday afternoon, it seemed as if the whole country paused with bated breath to hear the verdict of Derek Chauvin.  After his guilt was announced, commentators reflected on what made this outcome different.  Many factors have been pointed to: including the courage of teenager Darnella Frazer who captured the horrific murder on video;  and the fact that this happened during a pandemic when all of us were more or less stuck at home.  Unlike other awful events that seem to slip from our attention in our 24/7 news cycle, the entire story was able to be seen by the whole country and world. There was simply no denying what our eyes and ears showed us.

At last, the whole country could not keep walking or looking away. The murder of George Floyd seemed to lift the veil on the brutal history of white supremacy.

We can never know for certain all of the motivations that led to what happened next.  But, we witnessed and some of us engaged in an unprecedented display of solidarity.  An estimated 26 million Americans participated in marches across the country, making Black Lives Matter protests the largest movement in US history. According to the New York Times, more than 40 percent of counties in the United States held a protest.  Nearly 95 percent of those counties are majority white, and nearly three-quarters of the counties are more than 75 percent white.

In other words, last summer in an unparalleled way, White people finally began treating Black people in our country as neighbors in need.

This morning’s scripture reading directs us: “our love must not be simply words or mere talk – it must be true love, which shows itself in action and truth.” I’m not sure how many of us think about joining a protest as an act of love.  But, it can be. It depends on our motivation.

In 2016, Opal Tometi, a co-founder of Black Lives Matter, said  “We’re a movement that is ultimately fueled by love. I quite literally came to this intervention of Black Lives Matter because of the love I have for my brother,” Tometi said. “… He’s beginning to walk around this society with the knowledge that at any point his life could be taken? I just couldn’t stand for it.”

“Racial justice,” she said, “is not inevitable. It will take hard work by everyone who cares about making society more just for everyone. “It’s one thing for you to have nice thoughts. But nice thoughts aren’t going to save black lives. Your thinking is not moving or transforming our world. Your action will. You embodying the fact that black lives matter and bringing that world into fruition, it’s what’s going to change the world,” she said.

Her words remind me of what abolitionist Frederick Douglas said, “I prayed for twenty years but received no answer til I prayed with my legs.”

“The transformative potential of love, the creative power of love wielded as a social force, love crafted into direct, nonviolent action can overcome hatred and violence “ wrote Martin Luther King Jr.’s in 1958. “Such love, he says, not only lifts up the downtrodden but can also transform oppressors into liberators. Such love “is an overflowing love which is purely spontaneous….and creative. It is not set in motion by any quality or function of its object.

It is the love of God operating in the human heart.”  King paraphrases 1 Corinthians 10:24: “[It] is a love in which the individual seeks not his own good, but the good of his neighbor.“

On Tuesday afternoon, many of us witnessed an event we are likely not to forget – a White police officer being held accountable for the murder of a Black man.  Would it have happened if it weren’t for a teenager with a smartphone? Or a nation more or less at standstill due to a pandemic? Hard to know.

But, it was love that inspired the Black Lives Matter movement. And it was love that brought many people out into the streets last summer.  And it was a cry for love – to be seen, heard, witnessed, respected, and given justice that was finally answered. After all, as Joseph Fletcher so cogently articulates, “justice is love distributed.” Maybe part of what we saw is what can happen when enough people choose to love others who are finally recognized as neighbors.

Every act of loving service we offer is a gift – from us, through us, and, ultimately, to us. Whenever we generously give of ourselves to others we are doing as God commands and as Jesus showed possible in his life and even through his death.  The challenge for us is to see who is and who is not within our circle of care and to keep striving to draw the circle bigger, so that what happened to George Floyd, Ahmaud Arbury, 2nd Lieutenant Caron Nazario, Sandra Bland, Breonna Taylor, and so many others will never happen again.

May we continue to expand who we see and who we love as our neighbor. Amen.