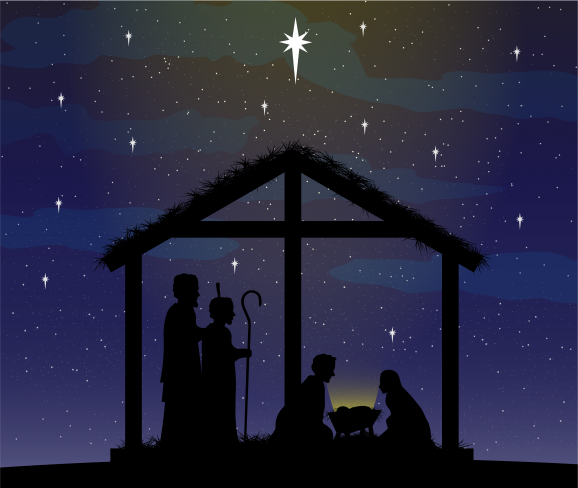 Christmas Eve is the time when we celebrate Jesus being born, by telling the story of his birth.  Mary and Joseph had to leave their home in Nazareth and travel a very long way to Bethlehem to pay taxes. Lots of other people did too.  Mary was pregnant with the baby Jesus, and when Mary and Joseph got to Bethlehem, every inn was full.  One kind innkeeper told them they could stay in his stable, which is like a small barn. They entered and made a comfortable place to sleep on the hay, among the cows and sheep and donkeys.  The animals helped them to stay warm, and that night Mary gave birth to the baby Jesus.

Wise kings from the far east had seen and followed a bright star.  They knew that this star was the sign on something very important, and had been following it for many days. When the star led them to the stable, they knew that this baby was a gift to the world and bowed down before Jesus and Mary.

Every year, on Christmas Eve, we will light the fifth candle of Advent; the large white Christ Candle. We tell the story of Jesus’ birth and sing hymns and songs about that day so many years ago.

On Christmas Eve, Reverend Sue will be reading a lovely version of the Christmas Story:  Twas the Evening of Christmas by Glenys Nellist.