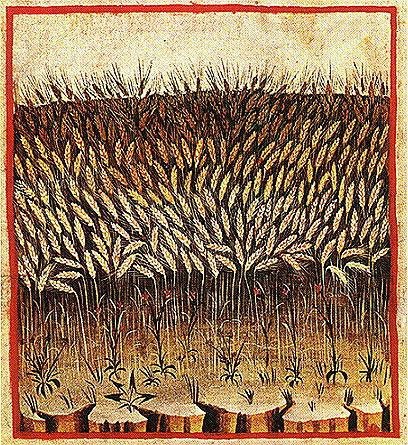 Jesus presented another parable before those gathered: “The kingdom of heaven may be compared to a farmer who sowed good seed in a field;but while everybody was asleep, an enemy came and sowed weeds among the wheat, and then went away. So when the plants came up and bore grain, then the weeds became evident as well.The farmer’s workers came and said, ‘Master, did you not sow good seed in your field? Where, then, are these weeds coming from?’

The farmer replied, ‘I see an enemy’s hand in this.’

They in turn asked, ‘Then do you want us to go out and pull them up?’

‘No,” replied the farmer, “for in gathering the weeds you would uproot the wheat along with them. Let both of them grow together until the harvest; and at harvest time I will tell the harvester to collect the weeds first and bind them in bundles to be burned, but gather the wheat into my barn.'”

Then Jesus left the crowds and went into the house. And his disciples approached him, saying, “Explain to us the parable of the weeds of the field.”

He answered, “The one who sows the good seed is the Son of Man; the field is the world, and the good seed are the children of the kingdom; the weeds are the children of the evil one, and the enemy who sowed them is the devil; the harvest is the end of the age, and the harvesters are angels. Just as the weeds are collected and burned up with fire, so will it be at the end of the age. The Son of Man will send his angels, and they will weed out of his kingdom all causes of sin and all who act lawlessly, and they will throw them into the furnace of fire, where there will be weeping and gnashing of teeth. Then the just will shine like the sun in the kingdom of God. Let anyone with ears listen!

I don’t know about you, but when I look around at the state of the world; when I look at the state of the nation, there’s a lot not to like. A lot. Sometimes I even think that our country has sunk to new lows. It discourages me, deeply discourages me, to see what looks like individualism, greed, and fear – to name just a few – gone wild. Like weeds.

When David and I lived at our last home in upstate New York, we inherited this massive garden planted by the previous owner as a testament to her sister who was dying of cancer. I felt this huge responsibility to try and keep it up, but I had almost no experience gardening. When the first spring season arrived, we couldn’t tell what was a weed, what was a thoughtfully cultivated plant? We were guided to wait and see. What bloomed beautifully? What choked the other plants?

All too often we humans decide something is a weed simply because we don’t like it or we don’t like where it is located. And this tendency to judge other things and other people based on whether or not we like them or we see their value is exactly what today’s parable warns us about. It’s not our job to judge others – whose hearts and intentions we can not know. We are to leave that to God. Jesus says, “At the end of the age, The Son of Man will send his angels, and they will weed out of his kingdom all causes of sin and all who act lawlessly.”

The Parable of the Weeds is one of those passages that can lead us to scratching our heads. It is not a simple lesson that we can “tie a bow on.” Rather, it’s an invitation for us to examine our response to evil in the light of God’s dominion.

Evil is not an abstract concept for Jesus or for Matthew. We may engage in philosophical debates about whether or not evil, the devil, or hell exists. But, if you consider how Jesus defines evil, it would be hard to argue that it is not real – not only in his time, but in our own. Evildoers are those who practice what is called in Biblical Greek “anomia”—which means without law; specifically those who rebel against God’s law of love: loving God and loving neighbor. In other words, evil is a preoccupation and set of actions concerned solely with me, myself, and I. Such people, Jesus warns us, are in danger of hellfire.

The Parable of the Weeds suggests that evil can be insidious – appearing at first glance to be good (As the weeds in this story, known as darnel weeds, mimic the appearance of wheat) when they are in fact destructive. The enemy operates by deliberately cultivating something which acts very much like what it is trying to destroy.
Judy Cannato asserts, “How often we are fooled by what mimics the real. Indeed, we live in a culture that flaunts the phony and thrives on glittering fabrication. We are so bombarded by the superficial and the trivial that we can lose our bearings and give ourselves over to a way of living that drains us of our humanity. Seduced by the superficial, we lose the very freedom we think all our acquisitions will provide.” She wrote that in 2006. How prescient are her words.

The problems with trying to rid the world of what we see as evil are manifold. For example, many of the church’s greatest sins—the Inquisition, the Crusades, witch hunts, and pogroms against Jews, were deeply misguided attempts at purifying the world. To use violence to spread the Gospel, undermines the very message of the Gospel.

In ways that are difficult, maybe even impossible for us to understand, the Parable of the Weeds teaches that God allows evil to exist in part so that good can grow stronger. God, whose power we are told in this story is ultimately greater than evil, can even use evil to wake us up to problems that have long been hidden from sight. In the face of lawlessness, lying, hatred, and divisiveness, we can be reminded of what values and people are worth stepping up for, worth marching for. We can grow in goodness when we see the evil, try to understand it’s roots, and shine a light in its direction to expose it. We grow in goodness when we reach out to those who have been harmed by evil with a desire to listen and an outstretched hand. We grow in goodness when we commit to making what is wrong, right; a commitment to healing and justice.

Congressman John Lewis, who died at the age of 80 on Friday, understood and lived this. He said, “I always felt growing up that in the South there was evil, but also good, so much good… When you see something that is not right, not fair, not just, you have to speak up. You have to say something. You have to do something….The essence of the nonviolent life, he wrote, is the capacity to forgive — “even as a person is cursing you to your face, even as he is spitting on you, or pushing a lit cigarette into your neck” — and to understand that your attacker is as much a victim as you are.” How amazing for someone who was physically attacked numerous times, even enduring a fractured skull during a Voting Rights Demonstration in Montgomery, Alabama in 1965.

Today’s parable teaches “in gathering the weeds you would uproot the wheat along with them. Let both of them grow together until the harvest” something that John Lewis, Dr. Martin Luther King Jr. and their companions knew, but their attackers did not. Divisive rhetoric and actions belie the truth of our interconnection. What may look to us as wheat or weeds above the ground, fails to see that our roots are intertwined below the ground. When the weeds of hatred rather than love for the neighbor run amok, we need to be reminded of an even deeper truth – that we are not separate; that our roots and our destinies are one.

One of the tragedies of our present national moment is that there are many people who proclaim that they know without a doubt who is the wheat and who are the weeds; those who fail to see that we are all imperfect people living in an imperfect world. Finger-pointing has become a new norm. And not only that, a desire to obliterate the “other.” Incendiary language about “those people who are trying to take away our way of life” or “the Republican party must be destroyed” or “the media is the enemy of the people” or “they are coming for your rights” or “all police must be defunded.” At the extreme ends of our political landscape, we hear an enraged desire to annihilate the other.

If we allow ourselves to believe that just because someone else thinks differently than we do – whether about religion, politics or any other matter – that they are somehow not worthy of respect or that they should be rooted out, we are missing the reality of our inherent unity. In the last few years, we have seen some people write off family members because of political disagreements. Doing this – even in the name of high moral ideals – falls short of the vision that Jesus calls us to. We ought to remember that weedkillers, like Roundup, are carcinogenic; the harm they do is frequently toxic for weed and weeder.

The way of Christ asks us to turn the pointed finger from here (pointing outwards) to here (pointing towards the heart.) If anything, this pandemic time should help us see not only what is wrong “out there” but what needs to be cultivated “in here.” The stress and strain of these last number of months showed most, if not all of us, our own weak points – the ways we respond to fear and uncertainty, our own tendencies to not fully love God and neighbor.
I would be stunned if during these last five months you weren’t face to face with your own shadow, your own reactions at least some of the time. I know I was. And if you didn’t see your own weeds for yourself, maybe someone else pointed out to you that they were beginning to show up or even take over. The question is, how do we bring those weedy parts of ourselves to the purifying fire of God’s love?

Though as a nation many are pointing fingers to trouble-makers beyond our borders, where without a doubt some exist, this weedy virus demands that we look within our society. When we do this we see that we have significant work to do: racism persists; our healthcare system has huge holes; our lifestyles are not sustainable; and more. As people of faith, we are called to ask how do we heal and repair the soil and the soul of our country?

It is crucial for the well-being of ourselves, our families, our churches, our country and our world, that we remember that the wheat and weeds grow together; that their roots are intertwined in the soil. Grounded in love, we can embrace the truth that lies at the heart of reality: wheat and weeds; we are one. As Rev. Dr. Martin Luther King so eloquently expresses, “We must learn to live together as brothers or perish together as fools.”

To the extent that we can acknowledge and embrace that we as individuals are both wheat and weeds; and that our limited perception may not fully grasp the ways in which God can use the weeds to help the wheat grow even stronger; we are called not to go on a campaign with Roundup in hand of exterminating the weeds “out there” but like John Lewis, like Dr. King to lovingly tend our gardens right here. Amen.