Sermon: Not Death, But Birth
Back to all Sermons

Not Death, But Birth 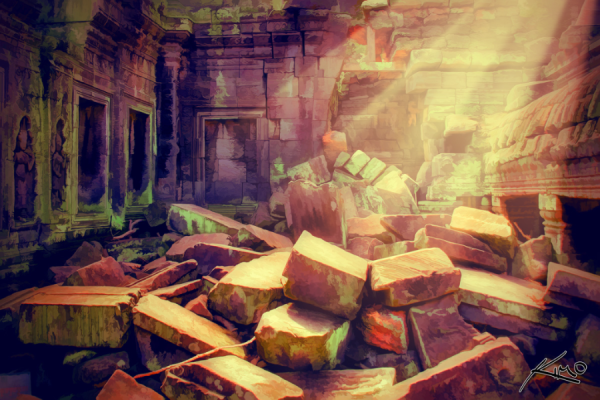 “I’ve got some good news and I’ve got some bad news.  Which do you want to hear first?” How often have you heard or said that?   Throughout the Gospel of Mark, Jesus has been repeatedly sharing the bad news first. Three times he paused to tell his disciples that they were headed to Jerusalem where he would face suffering and death and then, on the third day, rise again.

In today’s passage from scripture, Jesus and his disciples are finally in Jerusalem. The disciples are caught up in the spectacle of the temple, one of the seven wonders of the ancient world. “Look teacher, what large stones and what large buildings!” And they were – just one stone was 35 feet long by 18 feet wide by 12 feet high! The temple occupied a platform of more than 900 by 1,500 feet—twice as large as the Roman Forum and four times as large as the Athenian Acropolis with its Parthenon. The impressiveness of the temple    conveyed a sense of the impressiveness, permanence, and strength of a God who was believed to reside there.  The temple was God’s home and the center,   the heart, of community life.

Jesus has even more bad news for the disciples.  This grand temple is going to be destroyed.  Not only that, there will be wars, earthquakes and famines. Then, finally, comes the good news. “This is but the beginning of the birth pangs.” he says.  What possibly could he mean?

Looking at our world today, we certainly can attest that Jesus was right.  There are wars, earthquakes and famines.  And sometimes we can get so overwhelmed by all the bad news around us, that we fail to notice the ways that new life is trying to come into being. Yes, in the midst of the terrible things that happen – that have always happened – and as Jesus seems to suggest, will always happen – new life persists.

We ought not to expect that life will be free from catastrophe.  And we ought not jump to the conclusion that catastrophe means that somehow we have failed or God is absent – which are default positions for many of us. Again and again in the Gospel of Mark, Jesus calls us to notice where grace can be found even as people are oppressed, as religious and political systems remain unjust, and the natural world can bring terrifying weather. Even as awful things happen, Jesus locates grace within the creation, within ourselves and within others who give generously of themselves, especially in service to the poor.

In March 2020, when the world began shutting down because of COVID and the reality of our climate destruction became ever more apparent, when leaders in Washington seemed to be acting more out of a desire to remain in power than to protect vulnerable people and a vulnerable planet, we could have drawn many narrow conclusions and responded from fear, rather than faith.

In that moment, many seemed to forget Jesus’ warning, “Beware that no one leads you astray. Many will come in my name and say, ‘I am he!’ and they will lead many astray.”  We are still dealing with the consequences of those who have been fooled by someone who is manipulating others fears and grievances for his own ends.

Today Jesus calls us to look deeper.  To not get so caught up in all the bad news that we miss where new life is trying to break through.  In each of our lives metaphorical great temples have fallen, are falling and will fall. This happens when we experience divorce or the death of a loved one; when we are let go from a job we have loved; or when the Twin Towers came crumbling down or the doors of schools and churches shut because of a virus.

Michael Marsh writes, “Fallen temples confront us, forcing us to decide between reality and illusion, between life and death. They ask us hard questions about where we put our trust. The day our great buildings fall is the day we begin to face our corruptibility and impermanence so that we might know the incorruptibility and permanence of God.”

Beloved community, at times when the ground under our feet is shaking we always have a choice about where to place our attention and what story we will write.  We can choose to give into a narrative of fear and death, or we can trust in a God who is always working to bring life out of death.

On September 19, 2017 at 11 p.m., Christine Nieves and her husband were awakened to the sound of exploding glass. They were at home in the hills of Puerto Rico – just a few miles north from where the eye of Hurricane Maria had made landfall. When they emerged they couldn’t believe their eyes. It looked like a bomb had exploded. They were shocked and displaced, seeking shelter at a family home nearby. Three days later, they realized no help was coming.

They didn’t have water for over six months and lost power for nine months. In response, Christine and her husband started a community effort, Proyecto de Apoyo Mutuo Mariana. After several months of serving up to 500 meals a day in an entirely grassroots effort, they moved towards building a community-led emergency center complete with water filtration system, solar power, a crowd-sourced emergency plan, laundry, library, showers and beds.

From this experience they asked, what would it take for communities in Puerto Rico to face disasters and loss with courage, instead of despair? So they founded Emerge Puerto Rico, an education and leadership development non-profit organization focused on equipping young people with the mindset they need to unleash their greater collective power in the midst of crisis. As buildings crumbled around her, Christine gave birth to a new way of being community, to hope, to life.

When I look back over our time together as a community since the pandemic began, I will be forever grateful that we decided to look, really look, at the reality of the destruction of our climate – of the very foundations for any life on earth –  and to not just throw our hands up and say, “there is nothing we can do.” Instead, by the grace of God, we were able to see the gift of time we were given during the pandemic to allow something new to be born.  Without the pandemic, I’m not sure there would be solar panels on the roof, or the creation of a pollinator friendly garden out back, or the commitment we have made as a church to be stewards of the earth.

Michael Marsh says this: “Fallen temples are not (merely) about loss and destruction but about birth and creation. Our God is the God of life not death, the God of creation not destruction.” When our temples fall, when times are uncertain, many of us feel deeply anxious. We may feel tempted to try and return to what we understand as the way things always were.  We may long for what had been in the past, what we knew to be comforting and good. But, fallen temples invite us to look for what is trying to be born. The ongoing challenge for us is to keep our eyes on the prize; to become people who are so deeply rooted and grounded in God’s love that we can notice God’s invitation and God’s action in the world and then put our energy and attention there.

The wise Buddhist nun, Pema Chodron, notes, “The very first noble truth of the Buddha points out that suffering is inevitable for human beings as long as we believe that things last—that they don’t disintegrate, that they can be counted on to satisfy our hunger for security… not resisting the fact that things end, that things pass, that things have no lasting substance, that everything is changing all the time—that is the basic message. Everything that ends is also the beginning of something else.”

If anything, the pandemic called us to look more closely at the creation as a primary place of revelation. As people rushed to parks and other outdoor spaces, more of us began to realize the healing power of nature. And in doing so, more people began to recognize the sacred dimensions of the earth and her creatures that we have too long taken for granted and ignored.

In recent research done by Prof. Miles Richardson at Derby University in England, he found that people who pause to contemplate nature experience higher levels of happiness, lower levels of anxiety, and a greater desire to care for the earth. Walking outside isn’t enough, though. You have listen to the birds, watch the flowers bloom, notice the signs of life. As Jesus shows us again and again in the Gospel of Mark, “noticing” is a holy act; it allows us to recognize the divine at work in the world.

Writing during the Great Depression, Ruben Alvez asks, “What is hope? It is the pre-sentiment that imagination is more real, and reality less real than it looks. It is the suspicion that the overwhelming brutality of facts that oppress us and repress us is not the last word… That the frontiers of the possible are not determined by the limits of the actual. And that in a miraculous and unexpected way, life is preparing the creative events which will open the way to freedom and to resurrection…So let us plant dates, even though we who plant them will never eat them. We must live by the love of what we will never see. (We must have) a stubborn commitment to the future of our grandchildren.”

Yes, there is bad news in our world. Terrible, heart-breaking, fear inducing, overwhelming news. But, as spiritual people, as people of faith, it’s up to us to not get so distracted by the bad news that we fail to notice, pollinate, and nurture the good news, the new life striving to be born. “Our lives are made from the things we pay attention to.” (Lucy Jones) Let’s pay attention to grace. Let’s live for love. Amen.