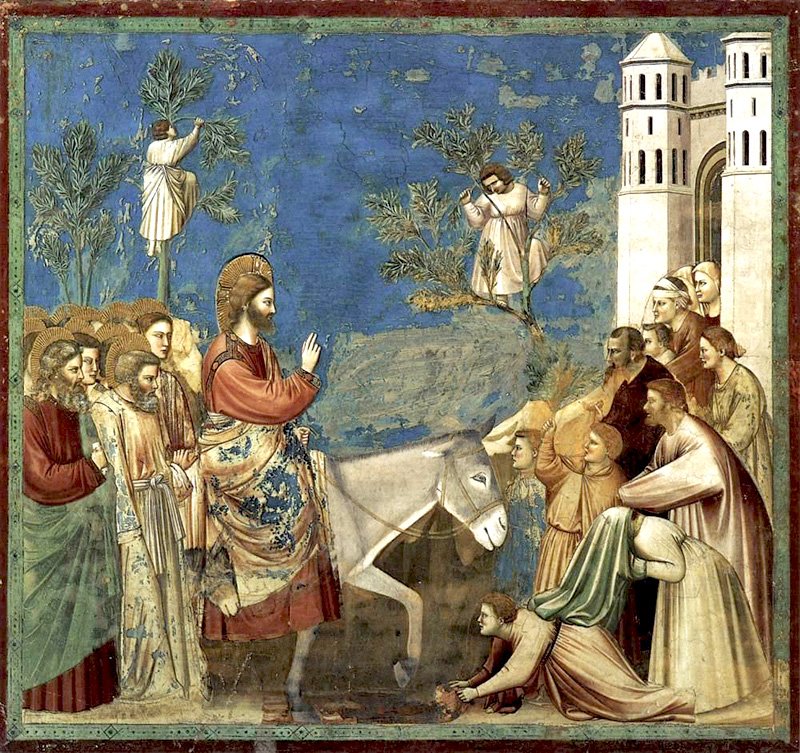 It’s going to get worse.

It’s going to get a lot worse.

Jesus knew this as he prepared to enter Jerusalem, a city we are told in today’s Gospel that is “in turmoil.”

And we know this, as public health experts tell us that the peak of the pandemic here is likely mid-month.

It’s going to get worse.

Jesus knew what was ahead for him. He entered Jerusalem proclaiming God’s ultimate reign of love. He, who gave sight to the blind, proclaimed liberty for captives, who threw merchants out of the temple, and challenged the authorities, did not make friends in high places. A man who showed up and stood up for the peasants who suffered under Roman rule, whose message threatened both religious and civic authorities, knew that he was on his way to a direct confrontation with them. His moment of entry into Jerusalem appears to be an intentional decision to face the suffering and death which lay ahead.

As biblical scholars Marcus Borg and John Dominic Crossan point out, what gospel writers take for granted and fail to mention is that while Jesus is entering with peasants from the countryside on a humble donkey through one of the back gates, on the other side of the city Pilate is parading in on a war horse accompanied by a squadron or two of battle-hardened Roman soldiers. Jesus shows himself to be a king of peace; Pilate is a leader of war.

Both Pilate and Jesus have crowds. Pilate would not have liked that. He ruled by intimidation and force and wanted to be sure everyone understood. From Pilate’s perspective, Jesus’ action amounted to treason. The punishment? Death on a cross. Jesus knew this, too.

For the peasants who were following Jesus, life was already challenging. In Jesus, they saw someone who understood their plight. They hoped he would be the one to help them overcome the difficulties of their daily lives. Their chant as Jesus entered Jerusalem “Hosanna” means “Save us!” And what did they want to be saved from? Crushing poverty, oppressive political rule, illnesses exacerbated by their poverty and lack of power. They yearned for a renewal that would make their very hard lives not so hard. They wanted another way of life. What they didn’t know, what they couldn’t know as they stood at the gates of the city, was that first, things were going to get worse.

Our lives are so different than the lives of the first followers of Jesus. For many of his followers, desperation was a daily diet. The people at the time of Jesus had so much to be saved from, so much to be rescued from that it is probably next to impossible for us to put ourselves in their shoes. In the Jewish thought of the time, the meaning of salvation is about being saved from anything that destroys the value of human existence. The earliest followers of Jesus wondered and hoped: Could Jesus lead the people into a way of life that would be different than their Roman occupiers? Could Jesus make life better for them?

Though the peasants who followed Jesus likely had no idea what was ahead for him, how things were going to get worse, he knew. Can you imagine what it must have been like to be Jesus, standing outside the gates of a city, knowing that once he walked in he was heading to his death? This is not an experience many of us usually have, but perhaps some of us can relate to, especially now.

What must it be like for health care workers with multiple exposures to the virus to stand at the doorways of their buildings, waiting to be checked to be sure they don’t have the virus before walking in? What is it like to know that you or someone you share your life with is gravely ill from the virus? What is it like for people getting ready to be hooked up to ventilators? These threshold moments can be fear inducing.

Public health officials now tell us that the peak of the virus here is likely to be mid-month. The fact of the matter is that none of us know how this next week or the weeks ahead will go. We have no idea how bad it’s going to get. More and more of us know someone who has been diagnosed, gotten very sick, and died. We can feel that this virus is beginning to tighten a grip around our lives. And, understandably, we want to be saved, too.

It’s hard not to feel a sense of dread about what is in front of us. Our cities, like Jerusalem at the time of Jesus, are in turmoil. We may wonder how much some of our leaders are like Pilate, driven to rule by fear and intimidation? Or are some more like Jesus and actually care to make life better, especially for those who are struggling the most? What messages we can trust?

This week we stand at the gate with Jesus. We look ahead to a week that is called holy. A week in which death is not merely an abstraction or a memory, but will visit our friends and our families. This week we remember that Jesus and his followers walked together to face the hardest thing he ever faced in this life.

As the week unfolds, we will see that some of his disciples stayed with him, some turned away, some fell asleep, and one even turned against him in his time of need. These may be responses we see in the week ahead. How will we show our care to those who are in agony? Will we have the courage to really look at the hardest of what is happening now and will happen in the future – to really see and feel it – so that we can go forward in life-giving ways?

The path of Jesus took him into the heart of suffering and death. In so doing, he created a way for us to face the worst that life has to offer in trust that we do not walk the path alone and in trust that God’s grace is present to bring new life out of death.

Mystic Julian of Norwich, says this: “Christ, our way and our end, brings us to a bliss we would not know apart from ‘travelling’ with him. As Christ in life carried his cross, so ‘we are therefore in suffering and labor with him as our nature requires’ Each of us must travail. Even the happiest life ends in death, but our travails, our work and struggles, like that of Christ or a woman in labor are productive pains, struggles to joy and new life; they are signs and benefits of Christ’s resurrection.”

This week we join the crowds who greeted Jesus shouting “Hosanna! Save now! Blessed is the One who comes in the name of the Lord!” Rev. Shannon Kershner writes, “Save now” is exactly what Jesus does. And yet, he does not do it the way anyone expected. He does not reveal the salvation, the making whole, the reconciliation of our world in the ways those who were… joining in his parade might have desired at the time they cried out ‘Save now.’” He did not do it in the ways we might desire when we cry out “Save now” today.

She goes on, “No, as the events of this coming week will remind us, Jesus saves us, reveals God’s making whole of our world, through his suffering, not his splendor; through his vulnerability, not his power over; through his willingness and determination to never waver being who God had called him to be—God with us, God for us—even though that insistence would lead him straight to his death on a cross.”

The only one who knew what was coming as he rode into Jerusalem that day was the one who was called “Beloved;” the one who at the beginning of this Lenten journey named us the same, “Beloved.”

Six weeks ago, as Lent began at the Annisquam Village Church, we heard words of blessing from Jan Richardson that bear remembering as we begin this Holy Week: “If you would enter into the wilderness, Do not leave without hearing who you are: Beloved, named by the One who travels this path before us…. This blessing can not free you from danger or fear. But on this path there will be help. We will know the strange graces that come to our aid only on a road such as this, that fly to meet us bearing comfort and strength, that come alongside us … and again whisper our name: Beloved. Beloved. Beloved.” Amen.

Yes, it is going to get worse. But as Julian of Norwich knew, “Jesus is our clothing, that for love wraps us and winds us, embraces us and totally encloses us, hanging about us for tender love.” Amen.

Our latest news delivered to your inbox.